Lois Rottonara Rott was born in La Ila in Badia valley (BZ – Italy) in 1938. He attended the School of Arts in Selva Gardena and completed his studies in Florence at the Magistero d’ Arte -Master School of Arts. He worked as a teacher for over 20 years in schools in the Badia valley, in Milan and in other Institutes in the district of Milan. During these years he developed his artistic activity in painting and sculpture always looking for new forms of modern art and working on different materials. His prolific artistic profile is made of an exceptional number of drawings, paintings, bronzes, ceramics and sculptures made of wood and resins and his polyhedral artistic skills allowed him to express himself through various forms and to become well-known on national and international level. In fact, many of the works of this Ladin artist can be found on international level in Galleries, Institutes of Arts, churches and private collections.

Rott’s art is characterised by the female figure and the horse as preferred subjects, and his unmistakable style is made of the “split” figures, both in sculpture and in painting. The marked split in the figures expresses a realistic representation of one part of the artistic subject, that is of the profile, and an indefinite representation of the other part. Consequently, entirety becomes particularity and vice versa, creating an artistic balance between definite and indefinite, reality and dream, existence and non-existence. The usage of strong colors expresses the concepts of joy, passion and beauty.

Rott has made personal and collective exhibitions in some of the biggest cities of Europe –especially in Italy and Germany–, of North- and South America.

In 2017 he exhibited in the context of the 57. Biennale d’arte di Venezia in the Palazzo Albrizzi and in 2013 in the MART Museum in Rovereto. In 2016 he exhibited at Spoleto Arte curated by Vittorio Sgarbi at the Festival dei due Mondi and was selected for the project D.O.C. – artists to invest in by Paolo Levi at the Triennale Verona, in New York and in Washington. In 2012 his artworks were selected for the Artistic Advent–Calendar of BMW. In 2014 he took part at the Biennale of art by ArtExpó in the Principality of Monaco and in December 2015 he took part at the international exhibition Miami meets Milano in Miami organised by the Biennale Milano – Miami Art Basel.

Rott is included in many catalogues of art such as:

In 2007 he carved a “Nativity of Christ” made of wood for Pope Benedict the XVIth.

Rott has illustrated many literary works published in Italy and abroad –go to the dedicated section.

Rott was part of the artistic committee at the exhibition panorama & Panorama organized by the Provincia Autonoma di Bolzano in 1987 and was Jury member and Jury President for various art competitions.

He was artistic consultant of the film Le Rëgn de Fanes – The Reign of Fanes, co-produced by the Italian Television RAI Bolzano and awarded in London and in the U.S.A and started thus the project Rott –art and music together with his daughter, the musician Susy Rottonara. In 2011 he produced the scenic paintings for the multi-award winning experimental opera Fanes Poem Musical composed by his daughter Susy and in 2013 they produced together the multimedia installation Dolasila dedicated to a famous Ladin legend of the Dolomites presented at the MART Museum in Rovereto, in the Museum-Foundation L.Matalon in Milano and in 2014 in the Italian Cultural Institute in Malta. In 2016 he painted the scenic paintings for the multimedia concert Il sogno di Dolasila – The dream of Dolasila. In 2017 a video installation from Il sogno di Dolasila took part at the international exhibition Energia creativa – tra astrazione e figurazione in the context of the 57. Biennale d’arte di Venezia in the Palazzo Albrizzi, site of the Guatemala Pavillon. 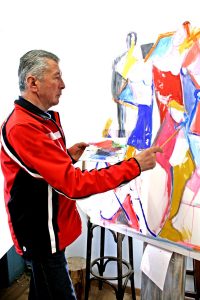